One of our greatest enthusiasm is to work with professionals who are passionate about bringing new technologies to schools. From the start of September 2016, we have been working with Hanna Niemelä, an innovative teacher from Espoo Christian School. At the moment, Hanna is leading the Pänttäyksestä Printtaukseen Project, a project co-funded by the Finnish National Agency of Education aiming at opening up new learning paths for children who will need new technologies such as 3D modeling, AR or VR skills in their adulthood.

In total, eight schools between Oulu and Espoo are on board, they represent both private and public education sectors. Different learning modules are developed to teach the new skills and they are carried out in all of the schools by the local teachers. In a bigger picture, the project intends to set an example for schools in Finland and around the world on the applicable methods that can be adopted in teaching latest technologies to the future generation. 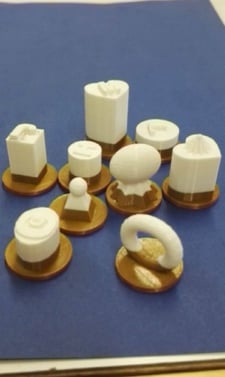 On September 5th, we went on a trip to Oulu Christian School with Hanna. There the local teacher Samuel Halonen was giving a course themed create your favorite board game piece. In the class, students formed groups and learned to use Tinkercad modeling program to execute their ideas and inspirations. During the design process, the students exhibited great enthusiasm and engagement, and were even more excited about presenting their final works in front of the class.

While gathering course feedback, Samuel Halonen commented: “It was not just my students that got excited about the topic, so did my co-workers who got involved. I believe everybody has obtained a share of encouragement. The lesson was clear instructed; and of course 3D modeling and printing can be simple, useful and fun.”

From the start of 3DBear’s journey, we have been working hard to help our teachers in taking the terror out of teaching new technologies. We believe that many students will take on jobs that do not exist at the moment but will emerge in the future. We are very thrilled to be an accelerator in achieving this great task.