Flying home after a successful week!

I’m exhausted, and jet-lagged, but I can't help but write these thoughts down. This whole experience has been so uplifting and energizing and enjoyable to me, that I have to share it. As I said I just got back to Helsinki from a trip to New York. We went to the Oregon Middle School in Patchogue Long Island, and AB Davis Middle School in Mount Vernon and ran lessons with students there. In retrospect the sessions were a huge success, but I wanted to relate some details that caught my attention.

We started our day at the Oregon Middle School by arriving bright and early with our equipment, we brought along a 3D printer and 10 iPads that we had configured with our software. We met Susan Sclafani in the library, Oregon middle school has built an impressive program based different maker techniques, they even have 3Dprinting. However as in many places they don’t have a lot of content to tie it into their curriculum, and they aren’t doing any computer aided design.

Jussi asking students what they would like to make using the 3DBear AR app.

My colleague Jussi jumps right into his presentation, for Susans class, he gives a brief lecture on the history of 3D printing, 3D design and the relevance of these techniques in the modern world. I watched the students while he did, their attention was focused on him, although some would sneak peeks at the 3D printer we brought, or some of the samples we displayed on a table in front of them. Soon we handed out the iPads and divided the students into groups. Their task was simple, use the AR app to design an upgrade to their school. Specifically a studio that can be used for filming, photography, and voice recording. Almost as soon as they had the tablets they were working, talking with one another, exclaiming things excitedly as they began moving objects around the room. The area they were redesigning was small so they visited it a few groups at a time while the rest did test builds in the library. There are a few questions but as usual not very many, they understand very quickly what they are doing, so instead students are working hard and having fun. 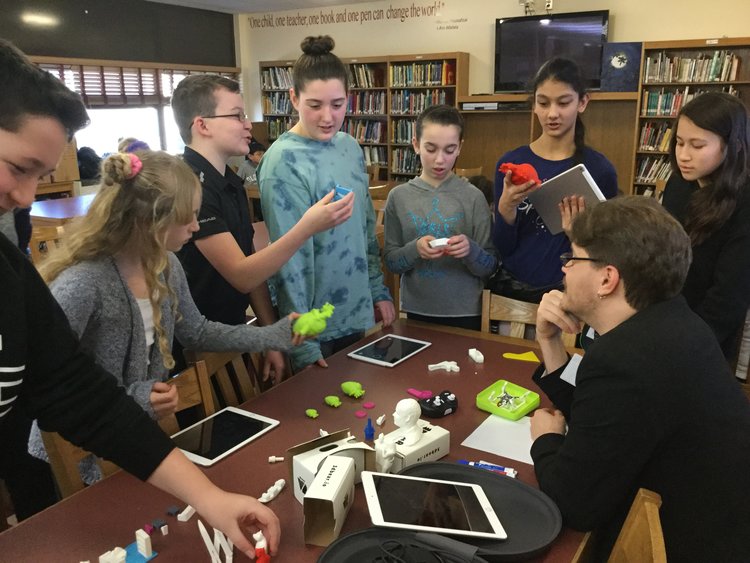 Kids actively discussing 3Ddesign as I sit and listen in the Oregon middle school library.

The day at the Oregon school flew by with each group coming forward to present their designs for everyone to see. The kids were animated, asking questions of one another, taking our constructive feedback, and clearly thinking about what they wanted to do next. One of the kids impressed me by combining some nondescript furniture elements and cleverly resizing them to make his own video camera in the app. Others captured my attention through the day through youthful exuberance, insightful questions, and good humor. Three hours had flown by, during the one break we had half of the kids did their best to stay and ask more questions and I didn’t see them disengage the whole time we were there. As anyone linked to education can tell you getting this kind of focus out of fifth and sixth graders is impressive, but I’m starting to get used to it.

The AR app engages students because it empowers them to take creative control. They understand the interface, because it is intuitive, and it compares to games and devices they’ve used their whole lives. Finally, and to me most importantly, it relies on no previous requirement, so any student can join in on a level playing field and be valuable. I’m told that all of the kids from that class have downloaded our app for themselves and that Susan is working with them to print each of them a 3DBear as a souvenir.

The AB Davis middle school in Mount Vernon reminded me of the schools I went to back in California, it was not as well funded as Oregon but the staff there went out of their way to welcome us, and it was clear that they worked hard to provide their students with every advantage they could reach. Pat Duggan let us highjack her classes for the day, and she went out of her way to arrange for other teachers to bring in their students during her free-periods. In fact we had 7 different classes of kids come in throughout the day, each consisting of around 25 students. We didn’t have the same amount of time to go into detail with any one class, but we jumped right into the app and letting students redesign in a different use case for each class. Every time the room filled up with students and they started to play with the app I was impressed by the same thoughts, again and again it was “These kids are great!” and “This class is amazing!”; by the end of the day it was clear to me that every one of them was. 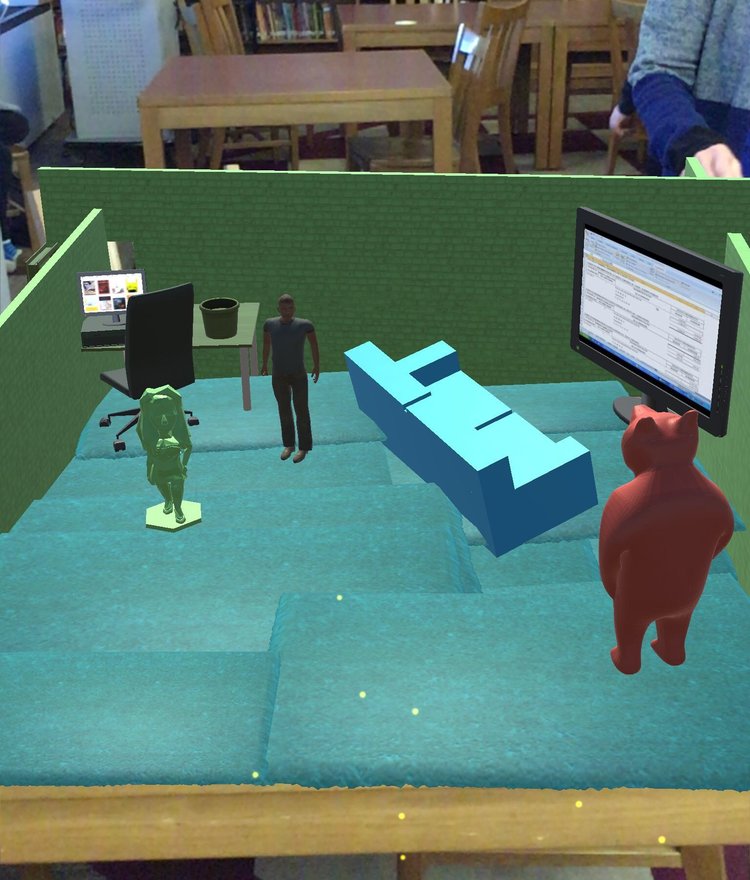 An example of the students 3Ddesign straight out of the app, featuring the 3DBear.

The most important thing that I've seen in the classroom, is the reaction of students. Every kid has their own personality and means of interacting with the world, and every one of them responds to a different kind of learning process, but all of them have learned to interact with the world around them. Making the educational process work through a 3 dimensional interface that operates on a smart device is just sensible. I’ve seen students again and again, some that very day, working well in groups, interacting with their peers and teachers, and excelling with the 3DBear AR app; and what amazes me is when a teacher afterward tells me that one here or there has had problems, or wasn’t living up to their potential before that class.

This shows that even students with different learning styles thrive with 3DBear even if they did not in a more traditional learning environment. As soon as they had our app in their hands, suddenly they were empowered. Then it was a different story, suddenly they had faith in them, they began to create immediately. Soon they are the ones at the front of the class showing and explaining their work with smiles on their faces. By the end of an hour they have done work that most adults can't claim to have ever done, and the pride of it shows on their faces. That is why I do what I am doing, and why I am so proud 3DBear is expanding back into the United States.

This spring we are doing pilots in the tri-state area near New York city but if you know of a school that needs to learn with the best the Finnish educational system has to offer, let them know that they need 3DBear, and have them contact us right away! If you’d like to test out our app for free just download it from the apple AppStore or Google Play, it is listed as 3DBear AR. Please let us know what you think of it!