Credit to Tracy Mercier, the post was originally published on www.vr2ltch.com on July 31, 2019.

It is a rarity that I come across an app that all of my PK-5 students can independently use. I can probably count on one hand all of the apps that I use with my students that anyone, from ages 2 – 12, can use!

One that I discovered this past year is 3DBear. I have to say that it has been a game changer in my media center! 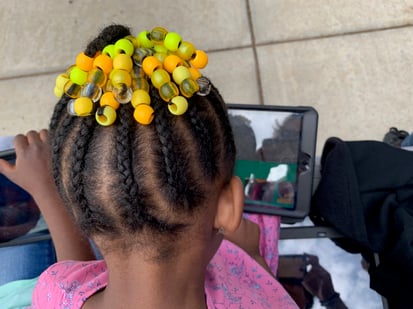 3DBear is an Augmented Reality app. The kids can transform our learning environments with just a few taps of the screen. My 5th graders and PK kiddos love it alike. They love how interactive it is and the embedded choice within the app.

One of the main differences of using 3DBear with PreK kids compared to fourth graders or even Kindergarteners, is giving them time to discovery what the app can do (I use the Responsive Classroom practice Guided Discovery). In the video below, you can see one of my PreK students choosing and resizing creatures. They also learned how to edit colors and flip them. You may think that all you would be able to do with an app like this with PK students is just let them play around with it. Not so. While discovery is important at first, in a short period of time they can be given a focused task.

I took a pretty common activity that young children use to practice beginning sounds and letter recognition. They were to look around the playground, find something that they know the beginning sound for, place the letter on it, and take a picture or video. For example, they could put the letter T on a tree, D on the drums, or E on the Eggs. Check out the videos below to see my awesome PreK in action! To learn more about 3DBear, check out their website, Tweets, and Grams!