The Cradle of Aviation Museum in Garden City, New York, is a world class STEAM (science, technology, engineering, arts and maths) destination 30 minutes from New York City. It features an ever expanding exhibit collection and education programs, engaging all ages in the exploration of our aerospace heritage from the first flight over Long Island in 1909, through the Apollo space missions, to current technological advances in aviation and space. The Cradle inspires, motivates, and stimulates our youth to be the next generation of aerospace scientists and engineers.

Cradle of Aviation Museum is literally the home of flight. It hosts various world class exhibits including one of the original Apollo Lunar Modules and artefacts from the first transatlantic flight by Charles Lindbergh. Now, the Cradle will be taking augmented reality ("AR") into use to engage and excite museum visitors.


3DBear's ambassador teacher Susan Sclafani, the lead librarian and media specialist of Patchogue-Medford District on Long Island, helped the Cradle staff to run the first lessons utilizing augmented reality for visiting student groups. We interviewed Susan, Richard Angler, the academic coordinator and senior educator, and Ines Jijon, the bilingual education coordinator of the Cradle about their first experiences with AR.

What did you do?

Rick & Ines: Students were asked to design a Mars base. First they had to think in pairs what you need to survive on Mars and then they visualized their ideas using augmented reality. It was something extraordinary for the students, and they reacted well to it. The fact that AR is so visual helped students better understand concepts. Students loved it. You could see them working hard on learning. I was surprised in a very good way, as this was uncharacteristic for some of the students. This was first time in my career when I have seen kids so engaged.

Susan: We ran the Mars Pioneers lesson by 3DBear for visiting student groups as a part of the Cradle summer camp. The lesson contained an introduction to augmented reality, then students got a task: think about the differences between the Earth and Mars. Use your imagination: how would you create a colony in Mars? What’s needed in the colony? How do you take into account the peculiarities of the red planet for human survival? Students worked in pairs. The museum was a perfect environment for mashing up museum exhibits with virtual objects. Creating a Mars base around an actual landing module was an incredibly powerful experience. That really sparked the creativity of students. 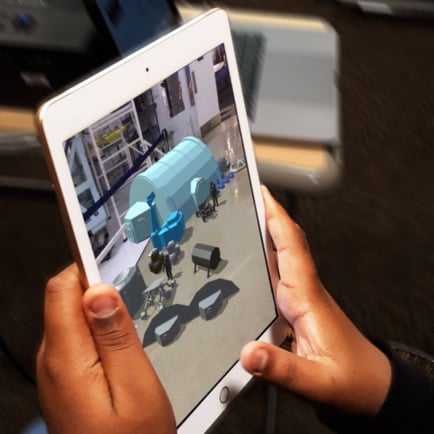 What did the students learn?

Susan: What was even more impressive, the summer camp program was aligned to students who had failed classes last school year. To see those students so excited about science was heartwarming. Once the students got the application in their hands, they really concentrated on the task. An open-ended visual design tool like 3DBear really levels the playing field in terms of student achievement. One teaching assistant commented during the workshop: “these are not the children I know”. One of the main benefits of using augmented reality in education is student engagement, being able to process complex and abstract information by creating and designing yourself. Students are already digital natives. Using an app is becoming a second nature to this generation. The interest is there naturally, and it needs to be harnessed for something good. When they create and design themselves, learning is deeper. By creating, students also need to think critically about cause-effect relationships. When presenting their designs, students apply their verbal skills and improve their general understanding of the subject matter.

Rick & Ines: Using augmented reality really helped students to understand the topic discussed (science of Mars) deeper and better. Kids, because of their background in playing video games, took to using AR immediately. It was natural. It was engagement. The museum staff really enjoyed thinking out of box and interacting with the students in a positive way. I’d give A+ to the program and how kids interacted with it. 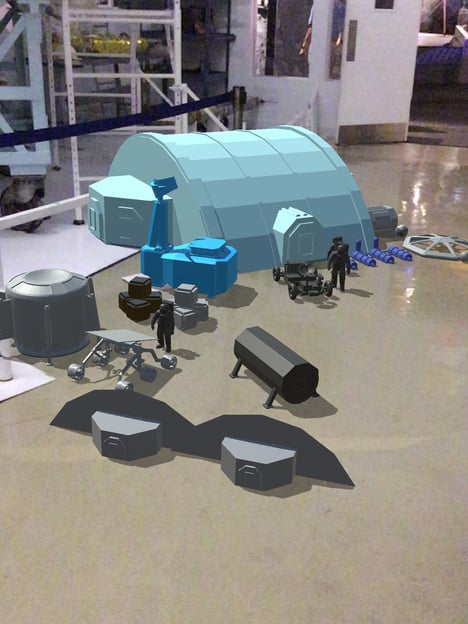 What are you planning to do in the Cradle with AR and why?

Rick & Ines: In addition to creating a colony on Mars and Moon we will first implement an activity where students will be visualising the first transatlantic flight. Then, we are looking at biomimicry and environments where nature has already done planning for the kids and they need to expand to do something useful. We will use 3DBear to visualize this. Engineering. Stuff we have on the Earth too, not just Mars/Moon bases. In life science this will work for putting the pieces of a cell together.  Put chromosomes and nucleus and DNA together. Nucleotide structures. We will use this to demonstrate the lock and key model.

Susan: Museums can excite visiting student groups better, and when you use augmentations students concentrate on what the museum and its artifacts really represent. The more designs I saw created by students, I realized that museums are a perfect canvas for using creative AR, as there is such an abundance of thrilling material and artifacts that ignite the imagination and creativity of students.

Richard Angler, the academic coordinator and senior educator of the Cradle of Aviation Museum

Ines Jijon, the bilingual education coordinator of the Cradle of Aviation Museum