Augmented reality in the classroom

Augmented reality is a relatively new tool in education. Beginning in 2010, the first augmented reality applications for smartphones surfaced. These tools, however, were very limited. The publisher had to pre-program what the augmented reality images to appear from trigger images like QR codes. Students looked at the images through their mobile phone by pointing the phone’s camera at the trigger.

Only after ARKit by Apple and ARCore by Google native augmented reality technologies were released two years ago, were AR apps for iPhone and Android really able to make progress; to give students the ability to create their own masterpieces. With augmented reality apps being less than ten years in the game—and really only two years as truly interactive apps—there has not been enough time for pedagogical evaluations and efficacy studies about what is the real benefit of augmented reality in the classroom.

In the last year, three studies have shown that using augmented reality in classrooms makes students more engaged, and students learn deeper by using it. Isn’t that, by the way, something that what we aim for in education overall?

The city of Helsinki ran a project in four city public schools where all the teachers directed their students to redesign their school yards in AR. Helsinki conducted a survey of educators and students who participated in this project. In this study it was found out that 90 % of the participants think that augmented reality is a good tool for learning higher order skills and 75 % think that it is a good tool for encouraging participation and engaging students. Moreover, 75 % agree that using AR supported deeper learning and meeting learning objectives. Considering how conservative teachers usually are in adapting new technologies, this is a significant result.

Secondly, in Espoo, the second biggest city of Finland, citizens and students participated in urban planning and developed their digital skills by redesigning their local environment in augmented reality. In the evaluation report of the project it is stated that using augmented reality “enables citizen participation and teaches future job skills with the help of new technology. It develops critical thinking skills and visual cognition, and enables learning not tied to language. Using AR helps expressing oneself. Using AR develops digital literacy”.

Read the full report which for example states: “3DBear supports the work of teachers by providing 3D modelling tool for creative work. It inspires students to use imagination and explore their surroundings through novel technological solution. There are several high quality pre-made lessons for different subjects and uses. It inspires students to do teamwork and combine different skills and knowledge to solve problems”.

In summary, based on these evaluations, we can determine that the main benefits of using augmented reality in the classroom are:

1) Engaging students in their own medium motivates them highly

4) When learning by doing and creating, it is easier to understand cause-effect relationships

The last point is well known in Bloom’s Taxonomy.

An important point raised by all of the studies is that learning how to collaborate is one of the main benefits of using AR technology in classroom. We in 3DBear will hear this and develop our product to have improved collaboration capabilities already in this Fall.

How can digital storytelling help students to reach their full potential?

People are three-dimensional beings. One of the greatest inventions of humankind, writing, enabled us to codify knowledge in 2D form. Only now, after 5000 years of knowing how to write, we are able to codify information in 3D using augmented reality and virtual reality. The revolution that is happening is similar to the advent of writing 5000 years ago even though we do not see it yet.

Think about: is quite different to read about the US declaration of independence than actually experience it yourself in an immersive VR experience. It is very different to describe chemical reactions on paper than actually show the molecular structure and interactions in 3D.

Pedagogically, virtual reality and augmented reality are good for different things. Virtual reality is good for immersive experiences: seeing places or events that you could not see otherwise. In a sense, it’s like television+. Augmented reality, however, by definition, is good for interacting with your environment. Whether it’s creating plays in drama class with AR elements and filming a video, or remodeling your science project with parts that you could not construct in classroom, AR is your thing. Because of this reason, AR is really the tool for collaboration and learning higher order skills, and doing project-based learning in the classroom.

Jennifer Williams writes about how to raise student engagement by letting them create Augmented Reality stories, and what a great tool AR is for storytelling.

Check out this webinar about girls who came up with solutions based on the 17 UN initiatives for a sustainable planet, to envision their products in augmented reality with 3DBear.

Like Yual Noah Harari writes, the reason why humans reached their position in the evolution is that they were able to tell stories and myths. AR is the tool which really enables you to tell 3D stories. We are all digital storytellers – or should be – if we want to succeed in the World of tomorrow.

The marriage of problem-based learning and student engagement

There’s a consensus from many sources, that the most important skills that we are teaching in schools today are not the subject specific skills but higher order skills such as creativity, critical thinking, communication and collaboration. For me, this is easy to understand. The subject-specific skills we learn in school might be already obsolete in jobs 10 years from now. It will not be enough just to understand maths, physics, or English, but you need to have the skills for reasoning, logic, computational thinking and communication. 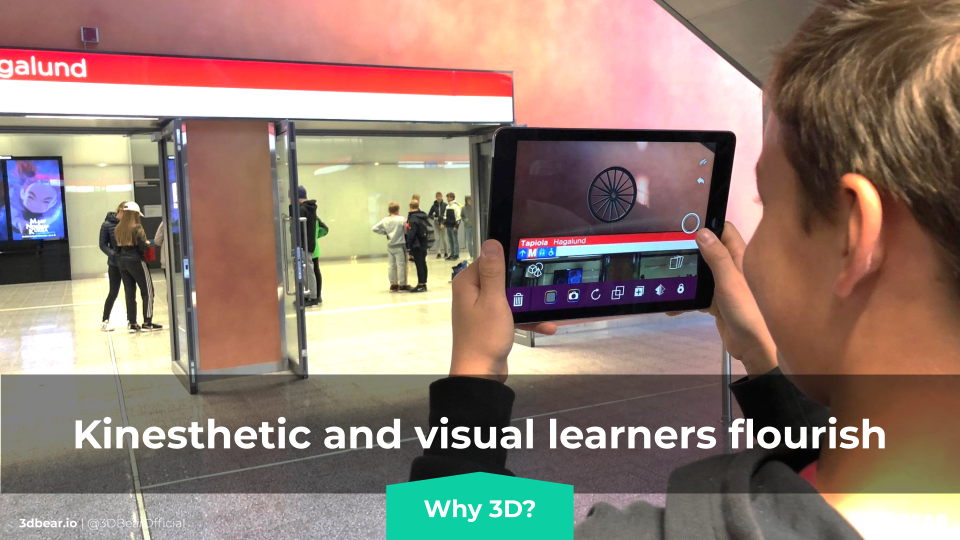 Problem based learning and inquiry-based learning are excellent pedagogical methods for teaching higher order skills, the 4Cs. When students figure out ways of solving problems in real-life context, not only they develop the 4Cs, but understand why they are learning the skills they are taught. You need to able to apply maths and physics in order to build a rocket. You need to be able to reason and use language to persuade and convince others about your point of view.

In my experience, project-based learning and inquiry-based learning lead to student engagement. Augmented reality is a perfect tool for achieving that. With AR you can change the reality to show your vision. You can visualize solutions to problems that you could not do otherwise. As they say, a picture is worth a thousand words. How many pictures is a digital story worth?

The (AR) story is just beginning

In summary, we are just beginning the transition from writing to codifying knowledge -again- in 3D. For the first time in forever, we have studies showing how that will affect learning goals. I expect that using AR for interacting with your classmates, doing science projects, and digital storytelling, will become part of the national curricula within five years.